Between January 2015 and June 2019, the federal government spent over N556 billion on oil pipeline repairs and maintenance across the country. This figure is contained in the monthly financial and operations reports released by the Nigerian National Petroleum Corporation (NNPC).

Analysis done by TheCable showed that within the time covered, the pipelines in the country were vandalised a total of 8,353 times.

These vandalism incidents, according to NNPC reports in five years, were recorded in Mosimi (Ogun state), Kaduna, Port Harcourt, Warri and Gombe.

Commenting on vandalism, Godwin Obaseki, governor of Edo state, said the Nembe Creek Trunk Line in Bayelsa suffered the most in 2019.

From 2015 to 2019, over 204 million barrels of oil valued at N4.075 trillion was lost to oil theft and vandalism, according to the Nigeria Extractive Industries Transparency Initiative (NEITI); while N129 billion was spent on repairs and maintenance for that year.

Incidents of vandalism have persisted and remained on the increase despite financial and security measures taken by the government to curb the menace. Vandalism is, unfortunately, not an isolated problem. Its ripple effects include life-claiming explosions, oil spillage, pollution and clean up.

At least three people were killed in Abule-Egba area of Lagos when a pipeline belonging to the NNPC exploded. The explosion was attributed to activities of pipeline vandals. Many valuables were razed in the incident. 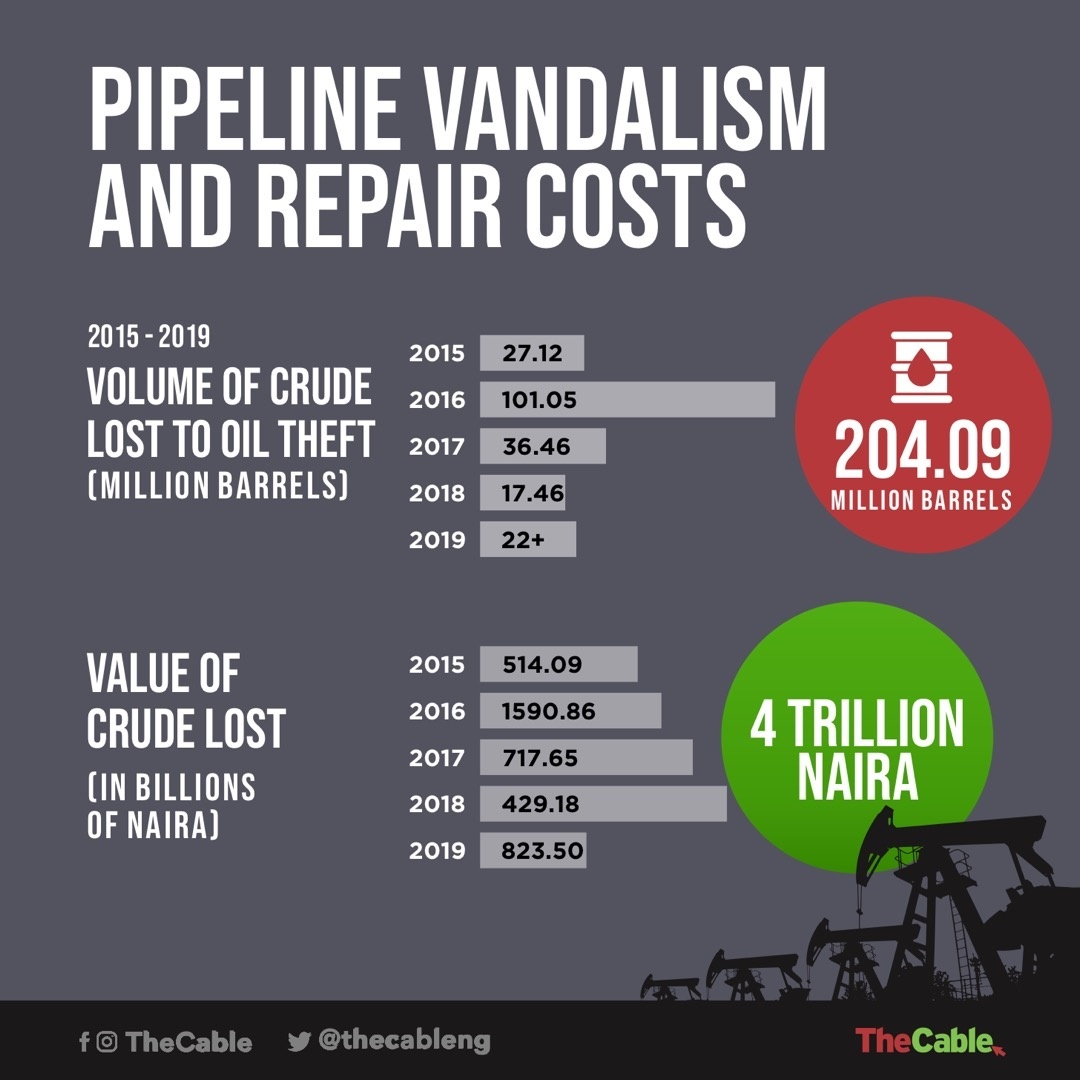 In its 2019 policy brief entitled ‘Stemming the increasing cost of oil theft to Nigeria’, NEITI said in 10 years, Nigeria lost over 505 million barrels of crude oil and 4.2 billion litres of petroleum products valued at $40.06 billion and $1.84 billion respectively.

It further estimated that between 2009-2018, $11 million was lost to crude theft and vandalism on a daily basis.

“Nigeria currently loses a sizeable portion of its crude oil to theft, vandalism and deferred production. The losses are monumental both in scale and scope. Estimates of volume of crude losses vary across different periods, with official figures showing an astronomical increase from the earliest reported figures that this paper can reference,” NEITI said in its report.

“Cumulatively, total crude and product losses for the period amount to $41.9 billion. This is the size of Nigeria’s entire foreign reserves. On average, Nigeria loses $11.47 million daily, $349 million monthly, and $4.2 billion dollars every year for the past 10 years.

“In terms of volume, 138.4 thousand barrels of crude oil were lost every day for the past 10 years, representing 7% of the average production of 2 million bpd. Ultimately, what is stolen, spilled or shut-in represents lost revenue, which ultimately translates to services that the government cannot provide for citizens already in dire need of critical public goods.

“Estimates of the volume of crude losses in Nigeria have varied widely. Figures offered by past and present government officials have ranged between 150,000 barrels per day and 250,000 barrels per day. Other estimates produced by private studies have been typically higher, in the region of 200,000 bpd to 400,000 bpd, suggesting that up to a fifth of Nigeria’s daily crude oil production may be lost to theft and vandalism.”

“Pipeline repairs, a direct consequence of vandalism, is a major index of losses in the oil industry.”

In its January-September 2015 report, the NNPC listed pipeline security reform as a “key determinant for change”.

An undercover investigation carried out by TheCable in the Niger Delta creeks showed how activities of saboteurs constitute a major threat to the finances of the government.

The report said the Nigeria Natural Resource Charter (NNRC) estimated in 2018 that the country lost more than N3 trillion to oil thieves in two years.

WHEN WE SUM UP

Security votes are paid to state governments and certain groups to ensure that the pipelines are secured from vandals. Though the amount spent on security votes remains undisclosed by the government, it is arguable that it runs into billions of naira.

If the cost of pipeline repairs and crude loss is summed up, then vandalism may have cost Nigeria nothing less than N4 trillion in five years —this is excluding the amount paid for security votes.

WHAT N556 BILLION COULD DO FOR NIGERIANS 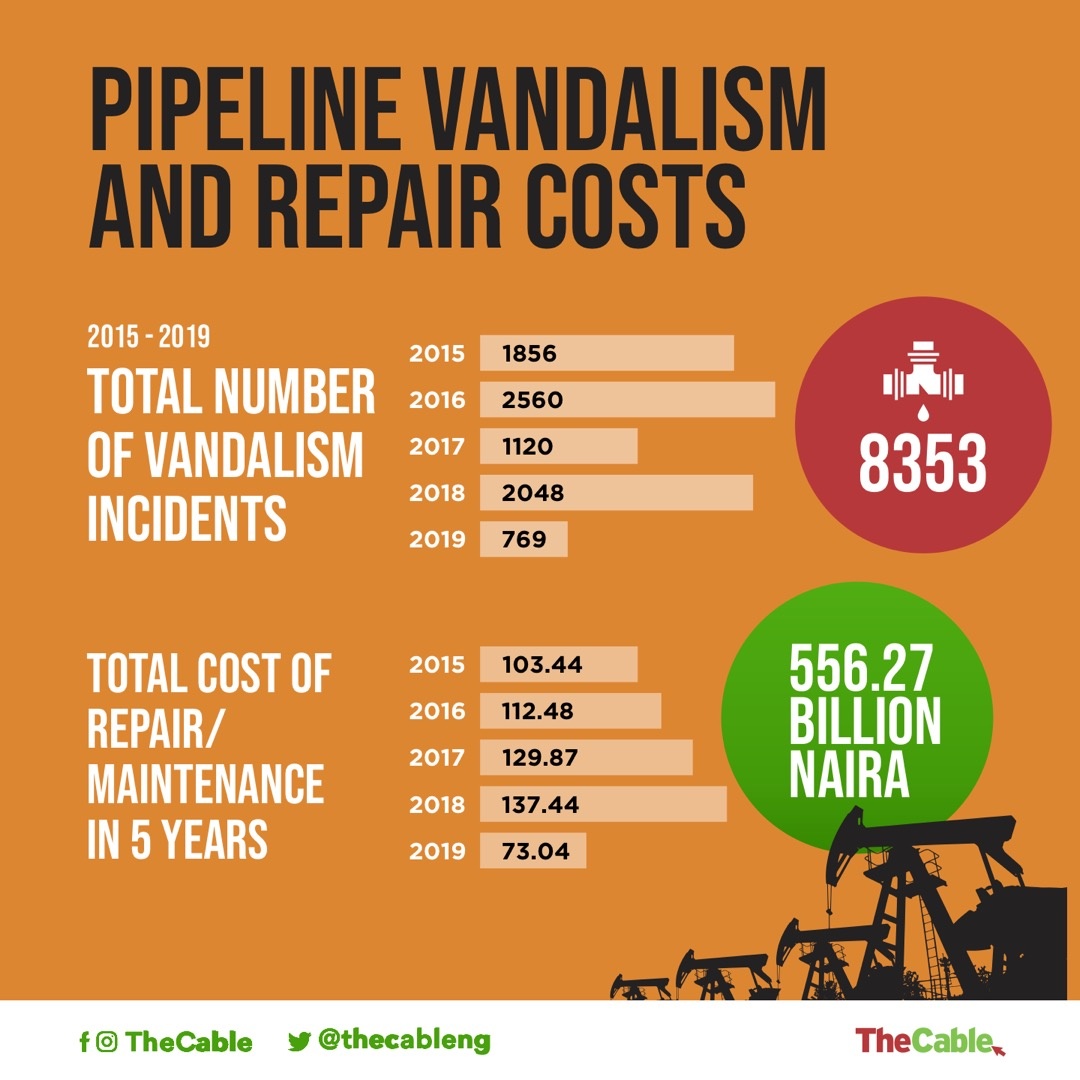 With a budget deficit of N2.18 trillion for 2020, Nigeria definitely does not have enough money to finance its expenditure and most importantly, cannot afford to allow its limited resources to go to “waste” through preventable and manageable ways.

The N556 billion spent on repairs and maintenance of pipelines could do a whole lot of other things for Nigeria and Nigerians if only the security apparatus put in place to prevent these incidents of vandalism were optimal in their responsibilities.

An investigation done by Fisayo Soyombo, an undercover journalist, in 2018 revealed that there are only four functioning radiotherapy (RT) machines in the country to serve an estimated 200 million Nigerians.

Meanwhile, the Atomic Energy Agency (IAEA) recommendation is one RT machine per 1 million people. That is, Nigeria needs about 200 RT machines.

According to the World Health Organisation (WHO), over 100,000 Nigerians are diagnosed of cancer annually, with 80,000 of them dying from the disease –an average of 240 Nigerians per day or 10 Nigerians per hour.

With N200 billion out of N556 billion, Nigeria can reach the IAEA recommendation and still have over N300bn left.

Zainab Ahmed, minister of finance, budget and national planning, had said under-recovery, also known as subsidy on petrol would gulp N450 billion in 2020.

If the federal government were to pay the proposed minimum wage of 30,000, N556bn would cover the salary of 16.84m Nigerian workers.

At N220 billion for the construction of 11.9-kilometre link roads for the 2nd Niger Bridge across Anambra and Delta states, Nigeria could have two of its kinds with no sweat.

NNPC: Vandalism, product theft puts us at a disadvantage

The NNPC has not denied that crude theft and vandalism puts the country at a “disadvantaged position”.

“Notwithstanding the reduction in downstream vandalism, NNPC undeniably needs the support of Nigerians especially in areas of security and infrastructural integrity,” it said in its December 2016 report.

“Favourable business environment will enable NPDC to reverse on average the over N20 billion monthly revenue currently being lost due to pipeline sabotage which would have created more profit and jobs.

“Products theft and vandalism have continued to destroy value and put NNPC at disadvantaged competitive position.”